Can Virginia be the East Coast Golden Triangle? 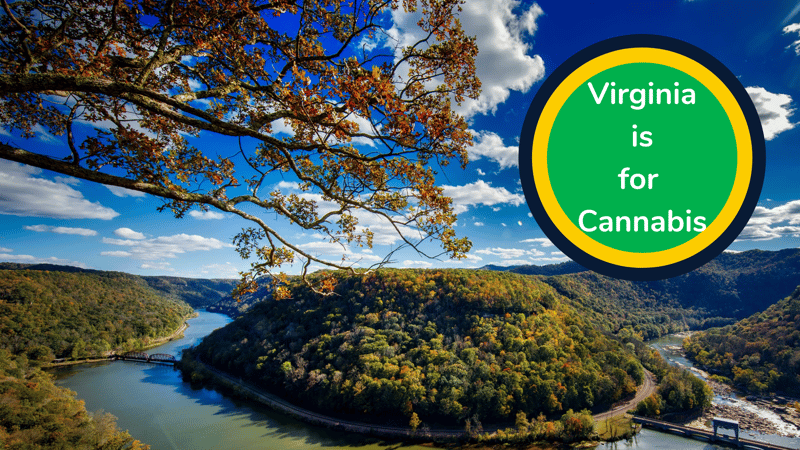 Virginia has a complicated cannabis history. In the early days, it was actually a law to grow hemp in the state; this requirement was set forth by the settlers in the early 1600s.

The state has an incredible climate for growing cannabis, which is one of the reasons the area required family farms to grow hemp. The weather is considered to be subtropical, so Virginia experiences humid, pleasantly hot summers and crisp, mild winters with moderate rainfall throughout the year. This is similar to the climate zone of The Emerald Triangle, humid and warm. The Emerald Triangle, however, is considered to be a Mediterranean climate zone.

Let’s talk about The Emerald Triangle for a minute. It’s located in the western part of California and known as the Mecca of cannabis. The famous region produces more cannabis in the U.S. than any other area! It consists of three counties: Humboldt, Mendocino, and Trinity.

The Emerald Triangle has a rich history, starting in the 60s during the Summer of Love in San Francisco's Haight-Ashbury neighborhoods. The Summer of Love sparked the back-to-the-land movement, which inspired (mostly) young people to leave the cities, start a community, and build their skills to successfully live off the land. The three counties were virtually untouched before the back-to-landers settled there, and they flourished the economy.

Cannabis was grown for personal consumption, however, it quickly became the hub for black market cannabis cultivation in the area. This wasn’t the intention of the back-to-landers, however, it just happened that way.

The illicit industry ended up funding schools, businesses, banks, and hotels in The Emerald Triangle. Cannabis was federally illegal at this time, and if you are familiar with American history, you know we were smack dab in the middle of The War on Drugs. Law enforcement visiting The Emerald Triangle were not treated kindly, with many reporting instances of poison ivy in their bed sheets and salt in the coffee. The locals’ way of life was threatened, and the law enforcement officers were the one doing it.

The Emerald Triangle is a microclimate, and the back-to-landers quickly realized this meant prolific cannabis production. The three counties are in a Mediterranean climate zone, the ideal climate for cannabis cultivation.

Jumping to the present days, Virginia legalized cannabis for adult-use in the 2020 election cycle. They were the 16th state to introduce an adult-consumption program and the first state in the Old South to fully legalize cannabis, Governor Northam just announced legislation to fast track an adult program July 1 2021 instead of the 2024 deadline! Virginia’s climate zone and already-powerful agriculture industry pose the question: can Virginia be The Emerald Triangle of the East Coast?

According to the Virginia Department of Agriculture and Consumer Services (VDACS), agriculture is the state’s biggest industry. Virginia’s farming is the largest agriculture industry in the United States, with nothing else coming in close second, according to VDACS. The agricultural industry in Virginia carries an economic impact of $70 billion annually, and provides more than 334,000 jobs in the Commonwealth. All of Virginia’s agricultural commodities rank in the top 10 among all U.S. states.

In addition to the already-booming agriculture industry in the Commonwealth, the state’s climate is ideal for cannabis cultivation, as we briefly mentioned above. “Virginia has a mild climate and receives about 40 inches of rain each year, making it an ideal growing location for many kinds of field crops. The Commonwealth is large and endowed with regions of unique natural resources — from the mountains of the west to the sandy soil of the east,” reads a whitepaper detailing how important agriculture is in Virginia.

There might be an opportunity for equitable cannabis cultivation in Virginia, too. According to VDACS, approximately 36% of farm operators are female! There’s still a long way to go, but it’s a powerful start for a large chunk of the Commonwealth’s farmers to be female. Female cannabis executives make up nearly 37% of senior-level jobs in the industry, according to a 2019 MJ Biz Daily survey, about 21% higher than the national average!

However, just because females make up a large portion of executives and Virginia’s farmers, that doesn’t mean life is easy. In cannabis specifically, women are often overlooked in favor of men. The industry is trying to change that from the inside out, and partnering with female farmers in Virginia might be a great start.

The future of Virginia’s cannabis industry

According to a report released by the Virginia government outlining the impact of cannabis legalization, the industry could generate $1.2 billion in economic activity for the Commonwealth. The report also expects the shiny new industry to produce $274 million in state tax revenue, but it needs five years to stabilize.

Additionally, the report shed light on cannabis-related arrests in the state, which totaled 29,000 arrests. Black Virginians, according to the report, are “approximately 3x as likely to be arrested for marijuana-related charges than White Virginians.”

Ultimately, only time will tell if Virginia can support the East Coast’s booming green rush, but they seem to be positioned well to face the challenge.

5 Reasons you should attend the 2017 California Cannabis Business Conference

Still trying to decide which cannabis conferences to go to this fall? You need to head to the NCIA...

Cannabis businesses are facing a growing challenge: Compliance. So far, 9 U.S. states have...