How to Save on Electricity While Lighting Your Cannabis Grow 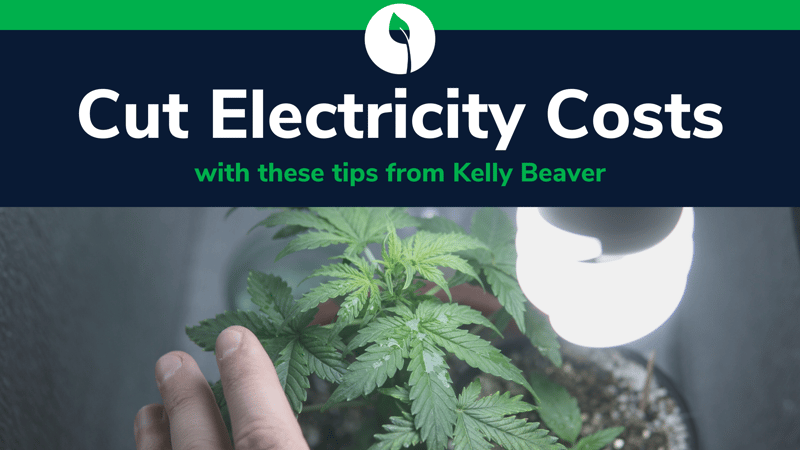 Electricity is one of the largest operational costs an indoor or greenhouse cannabis grow is responsible for, in addition to labor. While nothing replaces a skilled trimmer, automation in the cannabis space has tremendously reduced the cost of labor. On the other hand, it’s a lot more complicated to reduce your electricity costs.

Every indoor grow is different

It can be overwhelming to figure out how you’ll minimize electricity costs, mostly due to the seemingly unlimited dynamics that come into play. Where do you even begin? Since every cultivation space is different, and in addition to the regulations, pricing structure, and environmental elements of running an indoor or greenhouse cultivation operation, it’s not a one-size-fits-all kind of process. Regardless, we are going to give you a few starting points to help you refine your decision on lighting and in the end, hopefully, save you money.

Depending on the location of your grow and the time of year, the amount of lighting your plants receive can vary significantly. Rather than get into the specificity of which light you should choose, we’ve compiled a general overview of the strengths and limitations of each light style so you can choose which one is best for you. Remember, no solution will be 100% perfect, 100% of the time. It’s just about choosing the best solution for your current situation and from there, rolling with the punches:

High-intensity discharge lights are the bread and butter of the industry, but they are becoming less and less common. The large majority of people use 1000w HID lights or have at some point in their cannabis career.

There is no debate. The amount of light each HID bulb puts off yields more weight at a fraction of the costs of LEDs - up front at least.

Different bulb types can be used to emulate different seasons of the year, whether it’s the high-intensity blue lighting during spring or low-intensity red lighting of autumn. HID bulbs are widely available and economically friendly to initially purchase. Most lights have the ability to adjust the wattage output, so you are not using them on full power all of the time.

The lighting spectrum on HIDS can be limited outside of metal halide and high-pressure sodium bulbs. These devices use a lot of electricity, and over time, can cost more in electricity than LED competitors.

HIDS also burn hot, much hotter than other lighting systems. In fact, most manufacturers recommend the tops of your plants get no closer than three feet from the bulb, simply due to the intense heat being emitted. This, in turn, can limit space; especially if you are growing in a small room or have limited ceiling height.

In addition to the height restriction, you will need to offset the heat coming from these bulbs and ballasts with more A/C tonnage so the rooms don’t overheat. This might increase your costs in the summer, or force you to flower only at night when the air is cooler.

LED lights have made a giant splash in the market during recent years, a lot of that is due to the advancement in technology. The lights are slim, put off very little heat, and run at a fraction of the costs of HID lights. You can generally configure which, if not all, of the lighting spectrum you want to be supplied to your plants, and can have them custom-built for you.

Due to their size, there is less of a footprint in greenhouses, meaning less of a shadow cast when hanging them on rafters above the plants. LEDs will not put off enough heat to hurt the tops of your plants, in fact, unlike HIDs, the plant could be in direct contact with the light and not sustain any light or heat burn. Due to the economics of the lights and how little energy they use in comparison to their competitors, there are often tax and rebate incentives for using them. Choosing an adjustable LED light allows you to control the lighting, which reduces the cost of buying lights with different wattages.

The cost to purchase LED lights can run you sometimes 2-5x more than an HID light, so naturally, many people gravitate towards HIDs for that reason alone.

There is also a lot less data on the effectiveness of LED lighting structures. Many LED light companies have customers with more than successful results, so we are not doubting the capability of LED technology.

With that said, HID lights have a proven record of 20+ years delivering high-quality, high-yielding, indoor or greenhouse craft cannabis. You won’t find LEDs as ready-available at second-hand equipment stores, so when building a grow room on a budget: they may not be a viable option for you.

CMH lighting is seen as a mid-point between the two previously mentioned grow lighting systems, and therefore it’s increasing in popularity.

Ceramic metal halide lights are cheaper than HID lighting overall, due to them producing less heat and needing less cooling to maintain a good temperature. Not to mention, they are the ideal choice for vertical growing, such as shelving units, due to the footprint of the light being produced. CMH does have higher blue spectrum lighting than HID and performs better for vegetative phases of growth.

They are not generally used in large-scale operations, and most growers would argue they do not produce as much light as their counterparts, HID. The cost is only beneficial in the long term, as they are generally the same costs per unit as their HID competitor.

How much light do I need for my indoor or greenhouse cannabis grow?

After choosing what kind of lighting system is right for your indoor or greenhouse grow, determining how much light your plants need is the next step.

A marijuana plant can only take in about 35 moles, at a maximum, per day. Any additional light beyond that will not be absorbed by the plants. A par meter will give you a reading of micromoles per second, so it’s important to invest in a good one.

Below, you’ll find an easy calculation to see how much light you should be giving your plant. It can be used in any grow with supplementation lights, be it a greenhouse or indoors.

In this scenario, if you are looking to supply 35 moles to your plant, you’ll need to supplement 7.568 moles over the course of the "awake" period. If you measure the micromoles under each light and run that equation above, you should be able to determine how much supplemental light is needed for maximum efficiency and minimal costs.

You can also run this equation in reverse to see how much output your lights need to be producing in order to reach the optimal light levels. Let's continue the example below:

7.568 mols is what we are looking to supplement:

So in this case, you would want your supplemental lights providing 175 micromoles to your plants at any second. This would be the reading on the par meter.

It’s important to consider how much sun you are receiving if you’re growing cannabis in a greenhouse.

This will vary significantly depending on the time of year as the earth tilts; different light lengths will be present as well as varying levels of intensity. It's best to check the farmers' almanac, as well as the lighting in your region. This will give you an accurate estimate as to how much you should be supplementing, however, nothing will replace having a par meter read your current light exposure each day.

All in all, reducing the cost of electricity in an indoor grow can be hard. The plants simply require so much light, it’s going to be an investment either way. However, the above-mentioned steps are important ones to take in order to save as much money as possible.

Change is not only coming, it’s already here. In case you’ve missed some key highlights recently...

METRC is not your Business Software Solution

We’re not being critical with this month’s blog post. But the underlying truth is that METRC’s ...